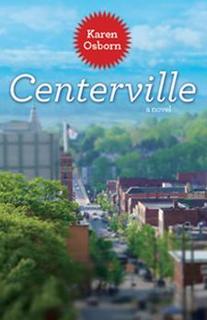 It is 1967 at the end of a long, hot summer. On a Saturday afternoon in Centerville, a sleepy Midwestern town, a disaffected husband enters a busy drugstore where his estranged wife works and sets a bag with a homemade bomb on the floor. Outside the drugstore, a fourteen-year-old girl places her hand on the door, then inexplicably turns away and keeps walking. Moments later, standing safely inside a bowling alley with her best friend, she hears a sound like thunder.

With one devastating explosion, the town is changed forever. In the next few days, four lives become entwined, as the townspeople face sudden loss and new, unpredictable realities. Set against the backdrop of the Civil Rights Movement and the escalating Vietnam War, Centerville forms an engrossing meditation on the complex questions that arise in the wake of senseless violence.

“Quietly searing. With the Vietnam War and racial strife thrumming in the background, Osborn confronts our bewilderment in the face of senseless violence.”

“A compulsively readable account of the human experience of tragedy and the trauma of its aftermath.”

“Exploring the civil rights era through the perspective of a small town and an awakening for one youth as well as everyone else, Centerville is an insightful and much recommended addition to historical and literary fiction collections.”

“Centerville…begins with a terrific bang, the shockwaves from which touch every part of the story until the very end….Placed in the late 1960’s, it is a tale of all times written by a gifted author.”

“Osborn’s powerful novel, set during the dog days of summer in a small Midwestern town in 1967, focuses on four individuals to map the intersections of local drama and a world in upheaval. Osborn, employing a restrained ruthlessness, maintains the tension throughout, and appropriately refuses easy outs for a satisfying conclusion.”

“Most writers would stumble over the top describing a blast that literally explodes the personality of a small town. In the hands of a master of craft, like Karen Osborn, devastation is rendered with devastating restraint. You may try to forget Centerville, but you never will.”

—Jacquelyn Mitchard, author of The Deep End of the Ocean

Karen Osborn’s deeply affecting novel Centerville keeps the incomprehensibility of evil always in focus, as her characters —young, old, brave, cowardly, driven by doubt, and committed to faith— struggle to find a way back to the innocence they once took for granted. In this subtle, beautifully written novel, the reader can almost hear the gates of paradise slamming closed on the American dream.”

—Valerie Martin, author of Property and The Confessions of Edward Day

"Karen Osborn Writes a Better Ian McEwan Novel than Ian McEwan: Centerville, a new novel by American author Karen Osborn, has been published at just the right time to remind us that sometimes the out-of-the-ordinary is what fiction needs. As a meditation on everyday violence, it's affecting. As a novel, it's brief, startling, and successful."

"A unique novel of smalltown America that begins with an explosion so wonderfully described you won't be able to put the book down. Karen Osborn combines considerable literary gifts with a storyteller's skills to produce the unforgettable Centerville."

"As with IN COLD BLOOD or THE SWEET HEREAFTER, Karen Osborn's beautifully written CENTERVILLE uses a single, horrific, small-town act of violence to dissect the values and morals of an entire culture—a culture that is at once violent and brutal, materialistic and superficial, yet capable of moments of heroism, compassion, and redemption. When an historical novel seems as if its subject isn't the past at all but rather pulled right from America's latest cycle of mass murder and senseless carnage, and when that novel does it with Osborn's brilliant prose and deep insight into the dark alleys of our twisted nature, then we can rejoice that perhaps there's still a chance, albeit a small one, for the human race."