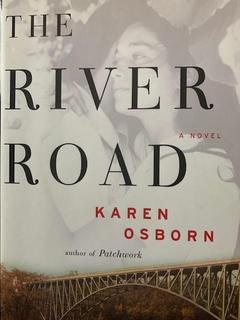 Brothers David and Michael Sanderson, have been best friends with their neighbor, Kay Richards, since childhood. One spring evening, Kay and David return to their homes along the banks of Connecticut River after a year spent at college where they’ve become lovers. That night, Kay, David and Michael embark on an adventure, recapturing their childhood closeness as they drive along the dark, forested roads of the Connecticut River Valley. Drug experimentation and their passions for one another mix in a deadly combination when the three stop at the French King Bridge. Moments later, David has climbed the railing and jumped from a massive height, disappearing into the swollen river below. With this action, he sets in motion events that will shatter all three of their lives.

The River Road is a suspenseful telling of what can happen when love, guilt, anger, and remorse combine to create blame and a trail of accusations. The criminal investigation that follows leads to a courtroom battle that pits two families, who have been neighbors and close friends for years, against one another. Told through the voices of Kay, Michael and Kevin (David’s father), The River Road explores the psychology of grief, the pull of jealously and guilt, and the endurance of love.

Praise for The River Road

"A haunting tale of the grief, jealousy, recrimination, and revenge in the wake of a young man's accidental death. Narrated from different perspectives in alternating chapters, the story has a Rashomon-like intensity. Carefully constructed and well told: a work of tremendous, quiet power."

"An extraordinary effort to engage the American condition as we find it now, write down what happens in a given situation, or what might happen, and then adroitly slip away, leaving the reader to decide the meaning— which has nothing to do with arcane literary allusions, but everything to do with the state of the human soul.

"Hypnotically and seductively fluid, beautifully told. Osborn immerses us from the beginning in hot and cold currents of love and hate that sustain, divide, and inexorably pull us all toward an uncertain fate."

"With grace and poetry, Osborn explores how the biggest emotions are sometimes found in the smallest seconds-and how a single moment might be the switchback that changes our lives."

—Jodi Picoult, author of The Pact and My Sister’s Keeper

"Osborn's third novel is a compelling and believable account of friendship, jealousy, and personal tragedy. Similar in theme and impact to Jodi Picoult's The Pact, it also uses alternating voices that explore guilt and parental responsibility, as in Russell Banks's The Sweet Hereafter. This exceptional book is highly recommended for all libraries."

"In the end, it hardly matters why David jumped or why Kay didn't. David was one of those magnetic but destructive personalities who, even in death, leave behind a trail of hurt."

“Osborn’s The River Road is a mixture of a whodunit— if anyone, in fact did do it— and a haunting tale that reminds us how many sides to a story there truly are, and how fluid truth is, depending on whose story you believe.”

“Osborn has a gift for limning the contours of the heart and the several trajectories of grief death sets in motion. The River Road is suspenseful and absorbing.”